Smoke gets in your eyes – kinetic fire art and bushfires

It’s hard to make “fire art” when the bushfire danger is “extreme”, Last summer was pretty hard – I live in regional NSW in the Hunter Valley (near Maitland) and we were hit pretty hard by the bushfires in December 2019 and January 2020. I found that it was pretty hard to get fire gigs as the bushfire danger ratings were constantly at the extreme. I had a few gigs cancel and on other gigs, I moved to LED performances instead -which is generally how I do things because safety is super important.


I felt the need to respond to the bushfires, personally, artisticaly – the bushland near me burnt pretty close. I evacuated, there was smoke for days and days it was pretty apocalyptic.

I built this character with her blinged-out face mask all in black like some 19th-century mourner. I made some experimental smoke cage poi.
Smoke is an interesting medium and I’ve never really played with it before but I love artists like Cai Guo-Qiang and djinn in traditional tests are referred to as being. “smokeless fire” and an ifritah is a female fire djinn.

I trecked all my gear into the native bushland with all my safety gear and a spotter. I filmed this as a protest, a lament to the forest that’s pretty much in my backyard. I’m going to take a moment to say that I took A LOT of safety precautions – extra water, fire blankets, extinguishers – waiting till weeks after the forest had burned. There’s a minimal likely hood of the smoke bombs setting anything on fire.. they sort of just smolder – though too honest I would like a better source for them as the colors were a bit meh…

I made this video and had it at my art exhibition (yes I’m also an artist and a graphic designer ) and on my youtube channel. I’ve never performed with smoke before so it was an interesting experiment that I would like to try again.

As a side note, I’d like to mention that after a bushfire the forest will burn and smolder for weeks… even after rain it may not be safe to venture in. The weekend after I filmed this a local motorcyclist burnt herself very badly in the same area, so I’d hesitate to do this again despite it being 3 weeks after the fire and having had quite a lot of rain.

So if your booking a fire performance and I ask you about rain plans and or cancellations. Please keep in mind that If the fire danger rating is too high it’s too risky for both me and your guests to make fire art or do a fire show.
It’s a good idea to have a plan – (backup plans are grand !) I have an amazing array of LED props for shows as well and they can be used inside and are relatively low risk and professional. 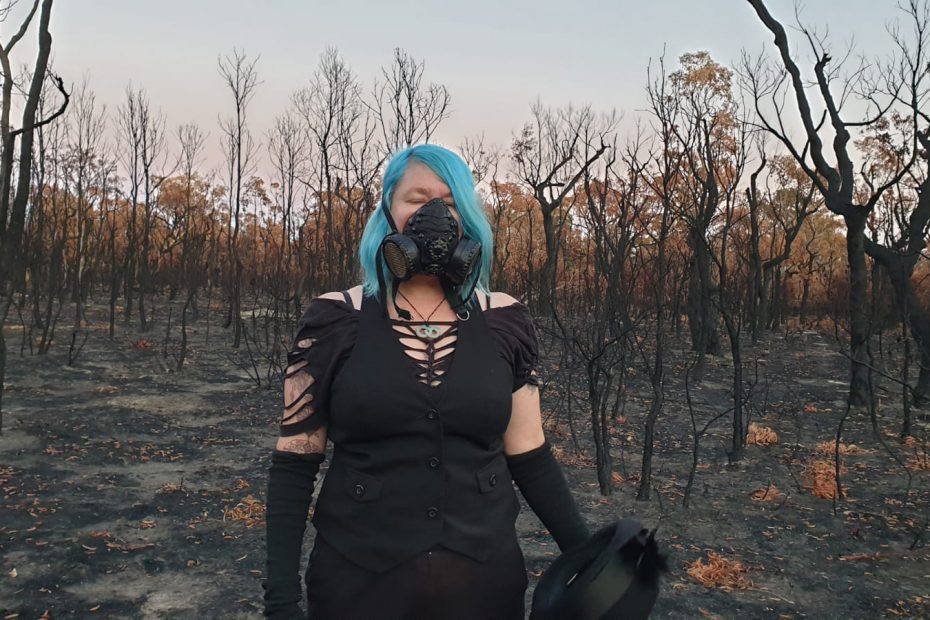