“Watts in its pants” is pure chaos – an LED stage show like no other. I casually mentioned to someone ( a fellow dressing as Harley Quinn) at Glowfest last year, that a crossdressed joker character on fire would be awesome, and it stuck in my head then just had to be brought into existence and put on a stage.

I put together this piece inspired by the joker character, Ive always loved the villlian’s – so queercoded and they get to have more fun right?

I’ve not done a lot of drag king work before so I was a bit nervous about that aspect- turns out the costume is super comfortable so great for moving in. It is like many of my costumes fire-friendly and one day ill do this piece with fire but for now, it remains an LED stage performance with options to rove (given the right kind of space to rove – poi can need a little room …)


So it’s a combination of a lot of things: a dash of drag king, some cases of cosplay, a whole lot of clowning & of course object manipulation or if you like poi dancing. In traditional circus acts its really object manipulation as it can be any object. But it’s also classic character work and of course storytelling.

Speaking of object manipulation over lockdown I’ve been slowly working towards some 3 poi tricks and I wanted to integrate them into the character, I like to build characters whose objects make sense and extend on them organically rather than just have a character that plays poi for no reason.

This joker character sometimes enters the stage slowly singing the classic “smile ” song from jimmy Durante. A song that really reminds me of my grandad in many ways and his legacy of depression. And in a lot of ways this work is for the man that used to tell me to dress better – a little piece of advice that sent me into a “suit phase ” where I used to wear a lot of men’s suits .. it was acceptable in the 80’s ok! -it’s a classic Dyke look too.

This song is so much a reflection of my lockdown experience but also a darker look at my own mental health habits and the idea of “toxic optimism” but that’s only setting the scene slowing down the pace for watts to come. My grandad was also a bit of a clown and liked to dance and show off – I think I may have inherited some of that.

I put the main piece together for the Wildside show – it’s a rock and roll explosion on stage. so I chose a Freddie mercury song – he’s a queer icon and his stage strut is just magic I wanted to explore that kind of peacocking and expansiveness of stage presence and roll in the glory without apology. As a female performer, I’m constantly being told I should “smile” (see above) while I feel male performers are allowed to just be free on stage, pull “stank face” when they do a guitar riff & generally take UP SPACE! without being as self-conscious or body conscious. I wanted that privilege.

The first time I ever got asked what my pronoun was I was a little taken aback, I may have been 30 & although it’s a big part of queer & LGBTIQ culture these days, growing up no one ever gave me the option to choose.

In the context at the time, I was performing the electric naga – all my characters were non-human monsters, spirits, other so I chose “it ” as my pronoun as in “it” came from the black swamp”. Ideally, I’d live in a world where my gender is a non-issue I like the concepts around being nonbinary ( Being quite the geek this works for me ) unfortunately that’s not the world I was born into though I’m glad its a reality for our younger queers.

My day job has been very much in a male-dominated industry while the guys I work with are well aware I’m a lesbian, they honestly don’t understand nor do I expect them to. I deal with both overt and under-the-table forms of sexism & homophobia frequently and it’s emotionally draining. Honestly, it shouldn’t matter what’s in “it’s” pants but it does…
we all know it does.

Ultimately watts in my pants are my LED poi .. yeah it’s a pun but it’s also my skillset, it’s my skills I want to be judged by not what’s in my pants. Watch me fling them round with wild abandon while I thrust my hips and pull clown faces.. oh and yeah I take off my jacket and take it for a spin too… 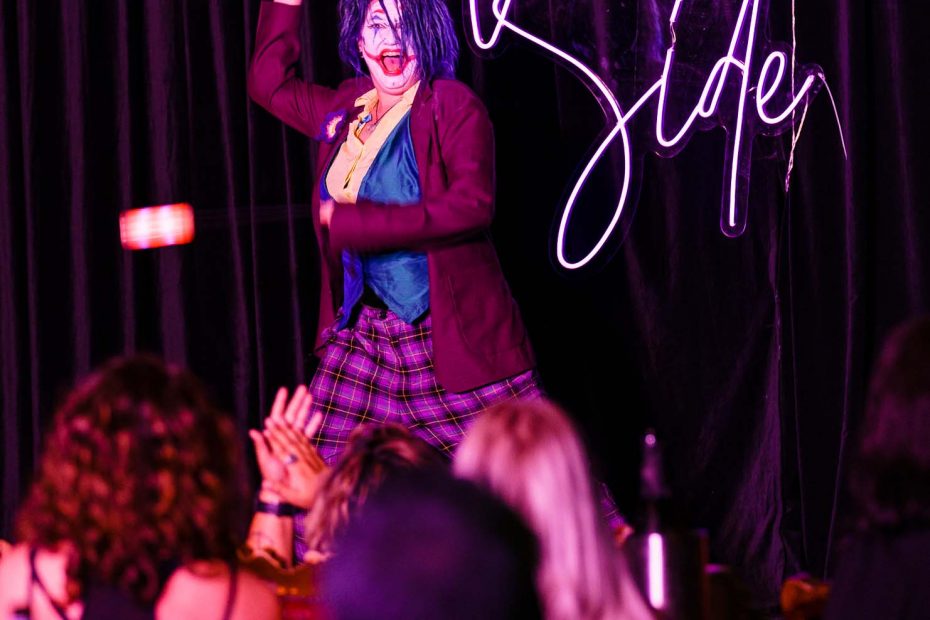